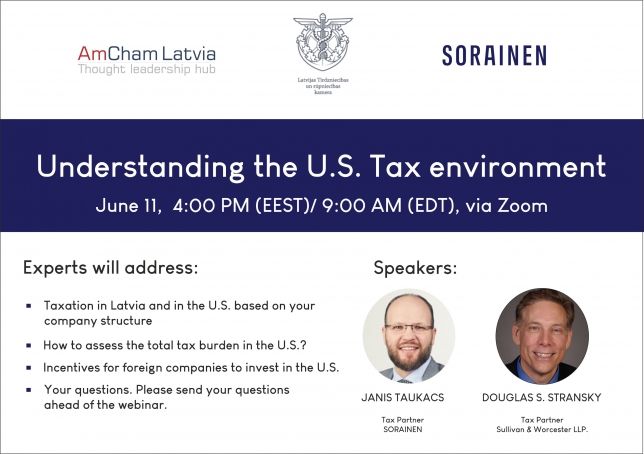 On June 11, we held an informative online event on the U.S. tax landscape in cooperation with the Latvian Chamber of Commerce and Industry and our member SORAINEN. This webinar was primarily aimed at companies planning to establish or expand their presence in the U.S. Janis Taukacs, Tax Partner at Sorainen explained taxation in Latvia and in the U.S. based on particular company structure as well as new CIT system and the holding regime. Douglas Stransky, Tax Partner in the Boston office of Sullivan & Worcester LLP spoke on incentives for foreign companies to invest in the U.S., current structures for entering the U.S. Market, Tax Cuts and Jobs Act (TCJA) and operations in light of Wayfair. He stressed that the U.S. federal corporate tax rate has been reduced to 21%, an anti-hybrid rule had been introduced and there is a minimum tax related to cross-border payments called Base Erosion Anti-Abuse Tax (BEAT).

Revisit the event below:

Douglas S. Stransky is a tax partner and leader of the International Tax Practice in the Boston office of Sullivan & Worcester LLP.  Doug concentrates his practice on international tax planning for clients in a wide range of industries, including a specialization in Nordic- and Baltic-based clients investing into the United States.  He has advised a broad range of publicly traded and privately held multinational clients in structuring tax efficient international mergers, acquisitions, dispositions and reorganizations and designing cross border financing strategies and foreign holding company structures.  Additionally, Doug works with Sullivan’s Fintech & Blockchain Group, advising clients on the tax implications of multi-jurisdictional cryptocurrency and fintech-related ventures.

Janis Taukacs has been practising tax & customs law since 1995. With his tax team at Sorainen ‒ and before that at one of Big4 ‒ Jānis has been involved in countless large-scale projects covering most of the main tax aspects in all industries operating in Latvia. Under his management Sorainen has been recognised as Baltic Tax Firm by ITR 9 times out of 11 years since the Baltics have been evaluated. His passion for work especially excels when the tax team is testing ground where nobody has trodden before.

Joining as keynote speakers will be Janis Taukacs, Tax Partner at SORAINEN and Douglas Stransky, Tax Partner in the Boston office of Sullivan & Worcester LLP.