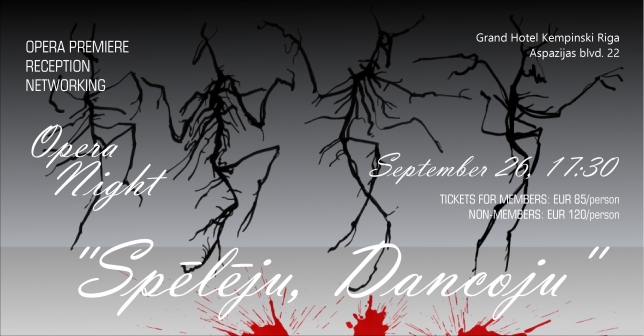 70 AmCham members along with their guests enjoyed a wonderful opening night of the production I Played, I Danced ("Spēlēju, Dancoju") by Imants Kalnins and Imants Ziedonis based on the play by Rainis at the Latvian National Opera and Ballet on September 26. The theatre piece "Spēlēju, Dancoju" was written during the wartime of 1916 by the author and poet Rainis. In 1977, the composer Imants Kalnins put the play to music. Leading Latvian director Laura Groza-Kibere together with visual artist Mikelis Fisers brought out the wild energy of this opera.
Along with the performance, the evening consisted of refreshments, snacks, and networking at Grand Hotel Kempinski Riga, 8th floor.

Our Opera Night has become a traditional and exclusive black tie event for AmCham members and their guests with a reception and opening night at the Latvian National Opera.

The performance of Rainis “Spēlēju, Dancoju" tells of flaming energy that awakens and leads to light by winning evil. The opera of Imants Ziedonis and Imants Kalnins was a charge of energy at one time. No longer the outer enemy of the Lord drains three blood drops of life. Indifference and dullness is what is being destroyed by slow smearing. Tots is a stranger who comes from afar and ignites longing for the unknown. The Gambler unleashes the earth and underground forces, mixing the secular with the temporal. With deceit and wit, he gets back the kidnapped Lelde and makes the fire run through the Devil’s threshing barn. "I'll be the opposite of the devil, god and enemy," Tots expresses. He tears up the world to reinvent and unite it.
Share:
< Back to Events