Election that will shape the course of the world 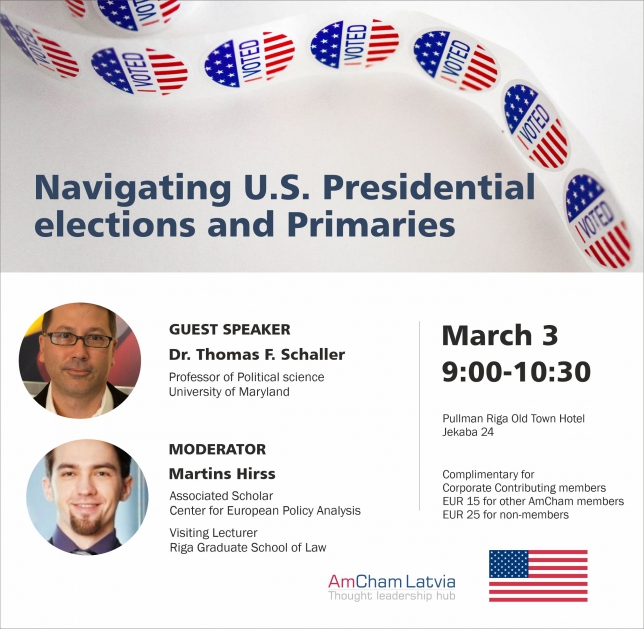 Members and guests had an opportunity to hear more about the U.S. Presidential elections and primaries as well as U.S. election-related political and economic updates from guest speaker Dr. Thomas F. Schaller, a Professor of Political Science at the University of Maryland. The discussion was moderated by Political Expert Martins Hirss, Associated Scholar of Center for European Policy Analysis and Visiting Lecturer at Riga Graduate School of Law.

Dr. Thomas F. Schaller has visited about 20 countries in 5 continents to conduct seminars on the 2020 U.S Presidential elections. Being a professor of political science at the University of Maryland in Baltimore, he is an expert in American politics and is well equipped with the knowledge to provide an overview of the current political situation in the U.S. and also comment on the potential developments facing the U.S. politics in the coming months.

The discussion began with an introduction into the basics of American politics, its two party system and the ideologies of its core supporters. Further, the uniqueness of the U.S electoral college system and its contribution to Trump's victory in the 2016 Presidential elections was explained. There was also an analysis of the opinion polls in the U.S., the recent political and economic developments and their indications for the primary elections. The interactive discussion allowed members to ask questions and get better acquainted with the elections by highlighting the key elements to look out for in the 2020 U.S. presidential elections - the election that will shape the course of the world for the next four years.

Speaker Dr. Thomas F. Schaller (Ph.D., North Carolina, 1997) is professor of political science at the University of Maryland, Baltimore County. Now in his twenty-second year at UMBC, Schaller teaches courses in American government, including the American Presidency, Presidential Elections, Interest Groups & Lobbying, and Campaigns & Elections. He is the author of The Stronghold: How Republicans Captured Congress but Surrendered the White House, Whistling Past Dixie: How Democrats Can Win Without the South, and co-author of Devolution and Black State Legislators: Challenges and Choices in the Twenty-First Century. A former political columnist for the Baltimore Sun, he has published commentaries in The New York Times, The Washington Post, Los Angeles Times, The Boston Globe, The New York Daily News, The American Prospect, Politico, Salon and The New Republic, and has appeared on ABC News, The Colbert Report, MSNBC’s “All In with Chris Hayes,” “Morning Joe” and “Up with Steve Kornacki” programs, National Public Radio’s “All Things Considered” and “Talk of the Nation,” PBS’ The Tavis Smiley Show, and C-SPAN’s Washington Journal. Since 2004, Schaller, 53, has given lectures on American politics and elections in 19 countries on behalf of the U.S. State Department. He lives in Washington, DC.