The National Museum of Art of Latvia, 3rd floor Hall 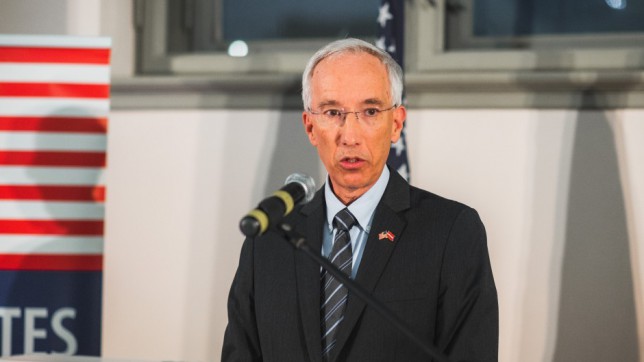 On October 7, AmCham and the U.S. Embassy in Latvia co-hosted a reception to celebrate 30 years since the re-establishment of diplomatic relations between the U.S. and Latvia at the Latvian National Art Museum. It was a unique opportunity to look back at the last 30 years of our shared history and commemorate this important milestone.

U.S. Ambassador John Carwile, AmCham President Zinta Jansons and Head of the Presidential Chancery Andris Teikmanis addressed the audience reflecting on the successes in the U.S.-Latvia relationship over the last 30 years.

On October 2, 1991, U.S. Ambassador to Latvia Ints Siliņš and a small team of American diplomats arrived in Latvia to set up a new diplomatic mission in Latvia, more than half a century after Soviet occupiers forced the American Legation in Latvia to close. In addition to formally establishing the first embassy at 7 Raina Boulevard, Siliņš and his team worked to support Latvia’s new leaders as they rebuilt the institutions needed to ensure personal liberty and defend the nation’s sovereignty.

A couple of years later in 1993 as Latvia was witnessing a rebirth of business activity, AmCham was founded with a commitment to promote American business principles and practice. Established by a small group of American investors with the strong support of the U.S. Embassy, AmCham has grown to represent about 150 members.

Throughout its existence AmCham's mission remains relevant: to make Latvia a trusted destination for American business.