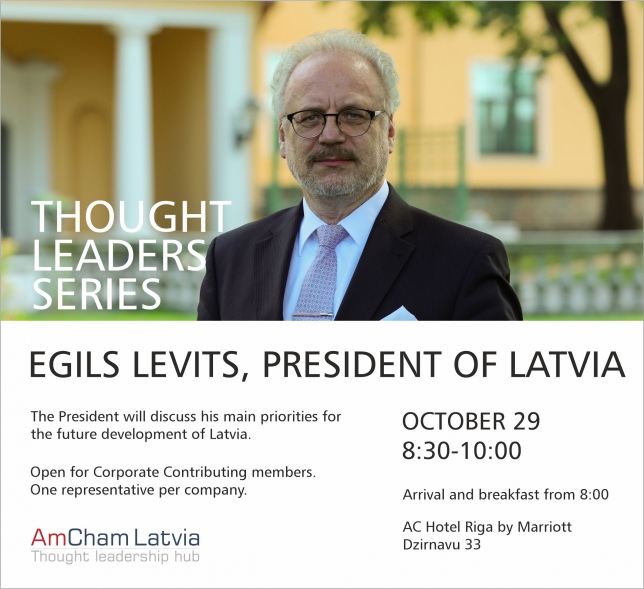 Our Corporate Contributing members had an exclusive opportunity to meet President Levits to hear his vision on the future of Latvia. The President engaged in an open dialogue with members on necessary reforms in the court system, education, healthcare and tax system. The meeting was held in the Thought Leaders Series, a program aiming to exchange views on issues critical for members' businesses and on improving the overall business climate.
About the Keynote Speaker:

The Saeima elected Egils Levits as the President of Latvia on May 29, 2019.
Mr Levits was the first Minister of Justice after full restoration of the Constitution, the first Ambassador of Latvia to Germany after restoration of the country, the first Latvian judge at the European Court of Human Rights (1995 - 2004), and the first Latvian judge at the European Court of Justice.
He has been a co-author of many significant draft laws including the Law on the Constitutional Court of Latvia, Administrative Procedure Law, Law on the Structure of the Cabinet of Ministers, etc.
Mr Levits has been the Ambassador of Latvia to Germany, Austria, Hungary, and Switzerland, as well as Deputy Prime Minister, Minister of Justice, and Member of the Parliament. He has chaired the Commission of the Constitutional Law of the President of Latvia (2007-2013).
Thought Leaders Series is a program designed exclusively for the top management of AmCham Corporate Contributing members in order to bring together leaders to exchange views on issues critical for their business as well as on improving the business and investment climate in Latvia.