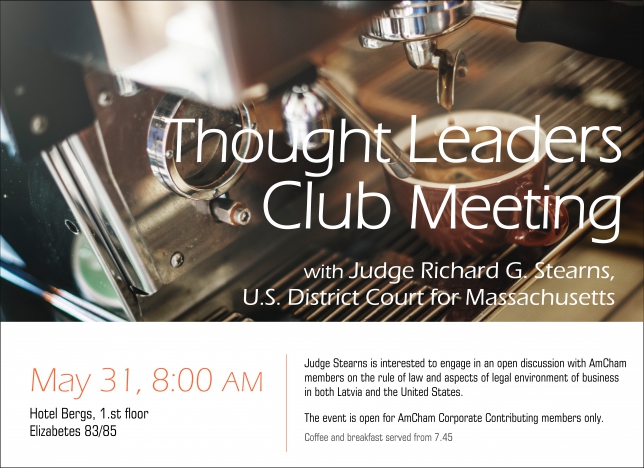 AmCham top-tier members joined the second event in the series of Thought Leader Club on May 31 at Hotel Bergs.  The event featured a special guest the Honorable Judge Richard G. Stearns from the U.S. District Court for Massachusetts. Judge Stearns engaged in an open discussion with AmCham members on the rule of law and aspects of legal environment of business in both Latvia and the United States.

The event was open exclusively for the top management of our Corporate Contributing members.

The Honorable Judge Richard G. Stearns was nominated to a seat on the United States District Court for Massachusetts by President William J. Clinton. Prior to becoming a U.S. District Judge in 1994, he served as an Associate Justice of the Superior Court of Massachusetts, as First Assistant United States Attorney and Chief of the Criminal Division for the federal prosecutor’s office in Massachusetts, and as a Massachusetts Assistant District Attorney. Judge Stearns has served as a member of the U.S. Judicial Conference Committee on Judicial Security, the Federal-State Jurisdiction Committee, the Space and Facilities Committee, the Mass Torts Working Group, and the First Circuit Judicial Council.

Apart from his judicial duties, Judge Stearns serves as a rule of law advisor to the U.S. Department of Defense, the U.S. Department of State, and the North Atlantic Treaty Organization. He lectures frequently on issues involving the rule of law, nuclear counterproliferation, counterterrorism, and judicial reform in the United States, the United Kingdom, Southern and Eastern Europe, Ukraine, Russia, Turkey, Central Asia, China, and Africa. He has represented the United States at a number of international conferences, including the Conference of European Constitutional Courts in Sofia, Bulgaria, in 2011. He is a Trustee of Vincent Memorial (Massachusetts General) Hospital in Boston, where he serves as Chair of the Committee on Science and Research for the Vincent Center for Reproductive Biology. He has for over a decade overseen the judicial consent decree establishing the long-term plan for the environmental cleanup of the Boston Harbor, the Charles River, and the adjacent watersheds.

Thought Leader Club is a program designed exclusively for the top management of AmCham Corporate Contributing members in order to bring together leaders to exchange views on various issues critical for their business as leadership, business development and improving the business and investment climate in Latvia. We are confident that this will grow as a forum that will benefit both the leaders of our member companies as well as AmCham's goal to improve the business environment.