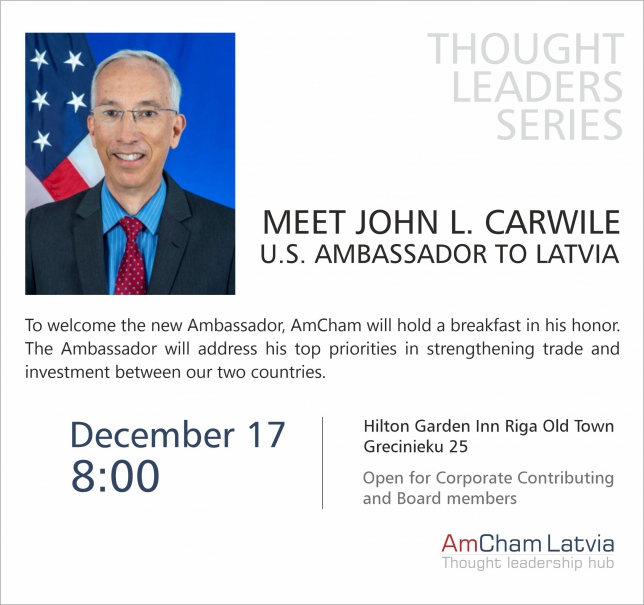 AmCham Corporate Contributing members were invited to an exclusive opportunity to meet the new Ambassador of the United States in Latvia on December 17 to hear his main priorities. The meeting was held in the Thought Leaders Series, a program aiming to exchange views on issues critical for members' businesses and on improving the overall business climate.
About the Keynote Speaker:

John Carwile is a career member of the Senior Foreign Service. Prior to his appointment as Ambassador, Mr. Carwile served as the Department of State’s Deputy Director of Career Development and Assignments, where he helped manage the Foreign Service assignments process and oversaw a 120-person staff.
Mr. Carwile served as the Deputy Chief of Mission at U.S. Embassy Kathmandu from 2013-2016.  Before Kathmandu, he was the Minister-Counselor for Economic Affairs at U.S. Embassy Rome, and led the Economic Section at U.S. Embassy Baghdad from 2009-2010.  Other overseas assignments include Deputy Chief of Mission at U.S. Embassy Bandar Seri Begawan, and tours in Ottawa, Belfast, Quito, Kuala Lumpur, and Lima.  He has also served in the Bureau of Economic Affairs, and graduated from the Foreign Service Institute’s year-long economics program.
Mr. Carwile has a BA from the College of Wooster and an MA from The Johns Hopkins school of Advanced International Studies.  He has received several Superior and Meritorious Honor awards, as well as Senior Performance Pay awards.
Thought Leaders Series is a program designed exclusively for the top management of AmCham Corporate Contributing members in order to bring together leaders to exchange views on issues critical for their business as well as on improving the business and investment climate in Latvia.
The event was open for Corporate Contributing members and AmCham Board Members only.