A view from the EU Parliament 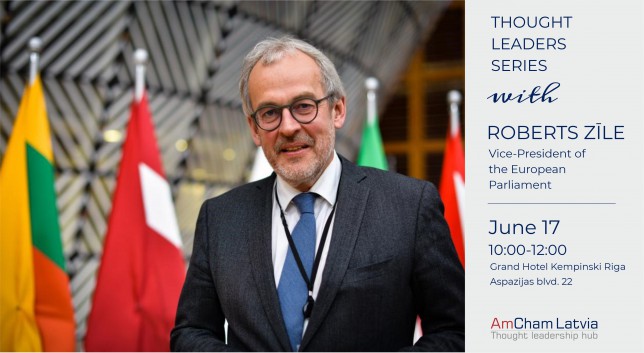 On June 17, Corporate Contributing and Corporate members joined Thought Leaders Series event with Roberts Zīle, Vice-President of the European Parliament who engaged in a direct conversation with members to address their concerns and questions.

Due to prior interest, the event was also open for a limited number of Corporate members.

Thought Leaders Series is a program designed exclusively for the top management of our Corporate Contributing members bringing together leaders to exchange views on various issues critical for their business.

Roberts Zīle is a Latvian MEP for the National Alliance political party from Latvia, and works for the European Conservatives and Reformists Group. He is a politician and an economist, well versed on economic reform and tax system policies, as well as in regional transport and energy networks. Currently, focusing on the Recovery and Resilience Facility, as well as the extensive transport program TEN-T, including the Rail Baltica project. Zīle is a member of the Committee on Economic and Monetary Affairs, as well as the Committee on Transport and Tourism.
In 2022 Zile was elected to be a Vice President of the European Parliament, the first Latvian MEP to hold this position.