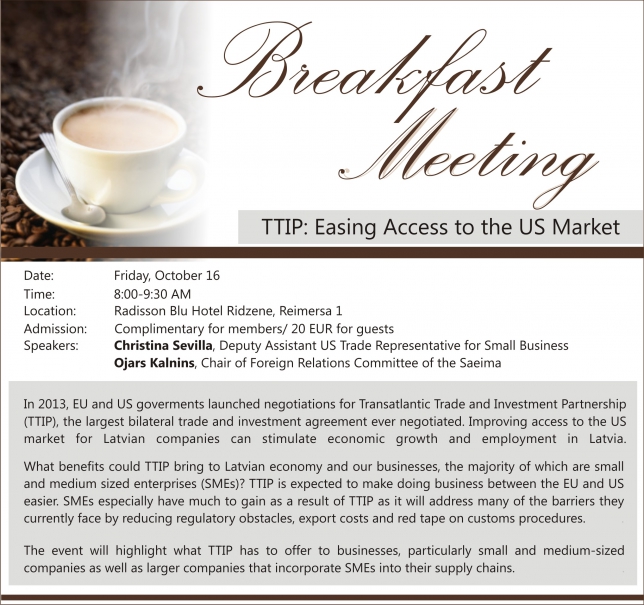 AmCham hosted a breakfast discussion on Transatlantic Trade and Investment Partnership (TTIP) featuring Deputy Assistant US Trade Representative for Small Business, Ms. Christina Sevilla and the Chair of the Saeima Foreign Relations Committee, Ambassador Ojars Kalnins. The event was attended by representatives of both foreign and local companies, diplomatic service and the European Commission representation office in Latvia.

The keynote address was delivered by Christina Sevilla, Deputy Assistant U.S. Trade Representative for Small Business at the Office of the U.S. Trade Representative (USTR), Executive Office of the President. She explained the major benefits TTIP would bring to small and medium sized enterprises (SME) in Latvia as well as in the US and provided an update on the current status of negotiations. She stressed that TTIP will reduce costs, risks and paperwork that currently affect SMEs if they are to engage in transatlantic trade. She said: "SMEs are engines of economic growth. SMEs in Latvia are already participating in supply chains of larger companies that trade with the U.S.". Ms. Sevilla emphasized that TTIP would reduce duplication of certification and fees which currently impedes many SMEs from doing business overseas.

Ambassador Ojars Kalnins, Chair of Foreign Relations Committee of the Saeima offered his views on TTIP’s implications, particularly, focusing on its geostrategic significance.

In 2013, EU and US governments launched negotiations for TTIP, the largest bilateral trade and investment agreement ever negotiated, which is expected to boost growth and competitiveness both in the US and in the EU. Trade between our economies is already well integrated: the transatlantic relationship today account for one-third of world trade in goods and services and half of global economic output. It sustains about 15 million jobs on both sides of the Atlantic.

AmChams across Europe, including AmCham in Latvia, have repeatedly extended their support for conclusion of an ambitious trade agreement which would not only eliminate tariffs, but would remove regulatory barriers that prohibit many companies, especially small and medium size enterprises, from export across the Atlantic.

There is great potential for increased trade between Latvia and the United States and the proposed TTIP can help expand it even more. AmCham will follow closely the latest developments of TTIP negotiations.

Christina Sevilla is Deputy Assistant U.S. Trade Representative for Small Business at the Office of the U.S. Trade Representative (USTR), Executive Office of the President. She develops and coordinates trade policy and outreach related to small and medium enterprises for multilateral, regional and bilateral trade agreements and initiatives. She is the U.S. lead negotiator on small and medium enterprises for the Transatlantic Trade and Investment Partnership (T-TIP) with the European Union. Sevilla is also an adjunct professor at George Washington University’s Elliott School of International Affairs. She received a Ph.D. in international relations and political economy from Harvard University.

Ojars Kalnins is Chair of Foreign Affairs Committee of the Saeima. Ambassador Ojars Kalnins was Ambassador to the U.S. and Mexico from January 1993 - December 1999. Prior to his positions at the Embassy of Latvia, he was Public Relations Director of the American Latvian Association (ALA). Ojars Kalnins was raised and educated in the United States, and, once Latvia restored its independence, gave up his U.S. citizenship to become a diplomat. Following his posting as Ambassador, he moved to Latvia and worked as Director of the Latvian Institute www.li.lv from 2000-2010. He is now a Member of the Saeima (Parliament), representing the party Vienotiba (Unity).