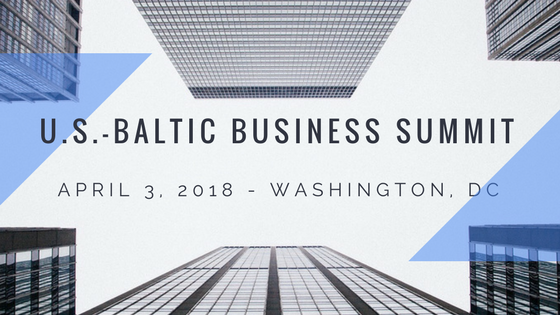 The U.S. President Donald Trump hosted the leaders of Latvia, Lithuania and Estonia in the U.S. - Baltic Business Summit at the U.S. Chamber of Commerce on April 3. It was be devoted to the 100th anniversary of independence of all three Baltic countries and enabled the highest level discussions deepening relations between the Baltic States and the United States in areas of security, economy and education. Presidents also had an opportunity to meet the U.S. Secretary of Commerce, Wilbur Ross. After the meeting in the White House, a high-level Business Forum took place, with representatives of Latvian companies.

In the U.S. - Baltic Business Summit AmCham Latvia was represented by President and Director of the Baltic region for AECOM Arnis Kākulis: "Fostering and promoting trade, investment, partnership and friendship between the United States and Latvia have been in the core of AmCham's mission since our establishment 25 years ago. Moreover, for the past few years AmCham has been particularly devoted to supporting Latvian companies that want to export to the U.S. by advocating for state support, sharing valuable contacts and organizing seminars on this important market. This Summit is the next big step towards a stronger trade between Latvia and the U.S. and we are thrilled to be a part of it."

The U.S. Chamber of Commerce in cooperation with AmChams in Latvia, Lithuania and Estonia holds an ambitious event - U.S.-Baltic Business Summit (Summit). The Summit includes Business Forum with several panel discussions, including "Impact of U.S. Investment in the Baltics" with discussions on the Baltic market opportunities and challenges, which was moderated by Arnis Kākulis, Director of the Baltic Region for AECOM and President of AmCham Latvia.

The event explored ways to encourage greater trade and investment ties and showcased success stories of U.S. investment in the Baltics and Baltic investors in the U.S. Business Forum with panel discussions focused on priority areas for U.S.-Baltic partnership including the digital economy, energy, infrastructure development, entrepreneurship, and innovation.

To view the agenda