Raising the bar for excellence 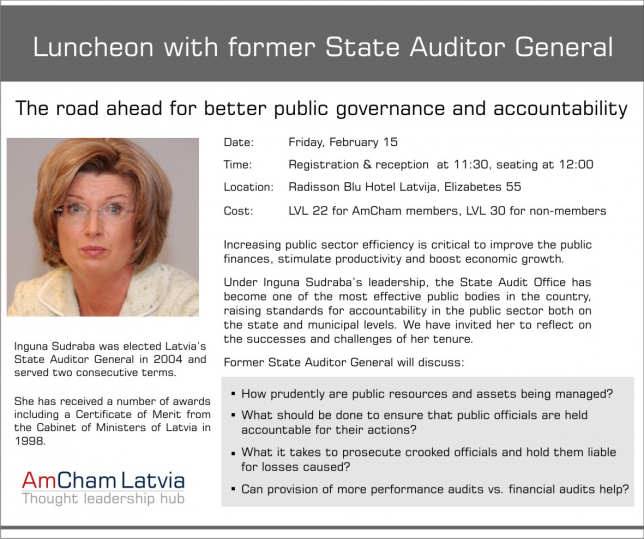 Under Inguna Sudraba's leadership, the State Audit Office has become one of the most effective public bodies in the country, raising standards for accountability in the public sector both on the state and municipal levels.

According to Ms. Sudraba, each public official should be able to bring certain results. Incorrect accounting is no longer a problem. Increasing public sector efficiency cannot happen without highly qualified, professional and responsible staff.

As an example she referred to the education system: "Our main resource is our people. How creative will they be? How can they develop their skills to be successful?" According to her, things should be done with professionalism and responsibility, and it begins at school.

The State Audit office cannot create or ensure public accountability alone. This must run in parallel with the objectives of other public institutions.

"When somebody is caught at wrongdoing, they should answer for their decisions," said Sudraba. Asked why only a few have been held accountable for their actions, she once again pointed out the lack of responsibility and professionalism. "I was able to create a management system which helped assess how well each team member was doing their job. Frankly, I don't see a reason why it couldn’t be implemented in the Prosecutor General’s office or in any other public office," she told.

Defining common values is a much needed next step to implement real change.