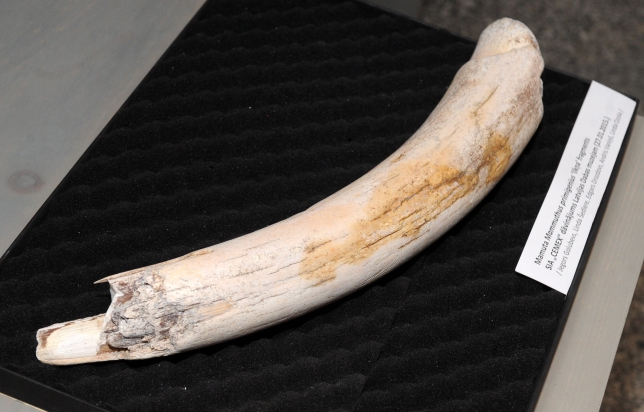 Latvian Museum of Natural History has received a very rare gift - a mammoth tusk that was found in CEMEX aggregates quarry located in Madona at the end of last year.

On January 27 during an informative conference dedicated to 170th anniversary programme of Latvian Museum of Natural History CEMEX and museum representatives signed a gift agreement according which mammoth tusk fragment found in the end of the last year in company owned quarry was handed to museum for its collection.

Linda Šedlere, CEMEX Member of the Board says: “The fragment of the mammoth tusk is the first such kind of historically important item found in our company's quarry during six years of its operation. When our employees accidentally found the tusk, we contacted Latvian Museum of Natural History in order to make sure whether it is even possible. CEMEX has always carried out its business activities with high responsibility towards environment and natural resources, therefore we are proud to be able to give our contribution in development of Museum’s collection, which will raise awareness of Latvian society and its next generation’s about nature values of Latvia.”

According to museum experts in total less than 40 mammoth fossils have been found in Latvia, from which the largest part are molars and only 7 are mammoth tusk fragments. They say that mammoth tusk found in CEMEX aggregates quarry in Madona is scientifically valuable evidence about Latvian natural history.