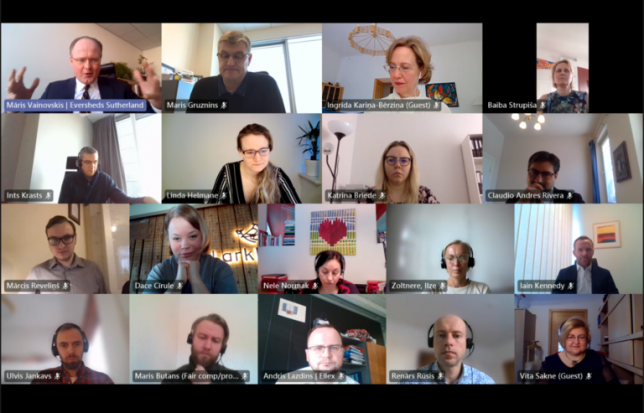 The Foreign Investors Council in Latvia (FICIL) is AmCham's close advocacy partner on many issues regarding the business and investment environment in Latvia. AmCham, as an Associate member of FICIL, is invited to delegate its members to participate in the FICIL working groups if they have interest or relevant experience in any particular area. More detailed description of each group is available here. Previous position papers of the work groups can be found here.

On February 11, FICIL Executive Board held an online meeting together with FICIL’s work group leaders to discuss the most topical issues currently on the table of the work groups, and to outline the way forward up to the expected High Council meeting in September.

The main topics FICIL would like to focus on this year could be grouped in four main overarching areas – human capital, digitalization, green economy, and rule of law. Healthcare and skills gap remain as significant areas of concern in the human capital block, as the pandemic has now highlighted this more than ever before. In the digitalization field, FICIL maintains its view that high-quality state digitalization policy management remains a pre-condition for sustainable long-term success in this area, therefore, FICIL will continue to advocate for the introduction of a State CIO role.

Furthermore, investors want to see improvements in the predictability and quality of the legislation process, which is currently seen by many as an obstacle to improved investment climate in Latvia. At the same time, FICIL will remain engaged in the green economy aspects as well. Here, FICIL calls for a clear, detailed and realistic plan on how to achieve the EU climate goals, and FICIL looks forward to being a close partner to the government in helping to achieve these goals.

The mindset to co-operate is essential as this year’s key areas of focus cover topics that consist of a wide range of elements and require equal attention to developments in multiple fields. For example, identification of potential improvements in human capital will require input from at least four different work groups – Education, Labour Force Issues, Digitalisation and Healthcare. Meanwhile, rule of law and quality of the legislation process concerns areas such as investment protection, battling shadow economy, and predictability of the tax system.

The work groups can look forward to a busy spring, as they will be discussing their main topics to include in the Position Papers that are presented at the High Council – an annual meeting between FICIL members and the government of Latvia. As always, FICIL aims to be a reliable partner to the government in an open dialogue on how to improve the business environment and investment climate in Latvia.

There are several work meetings planned for March 2021:

As a member of FICIL, AmCham invites its members to participate or continue taking part in the following 14 work groups of FICIL:

Please note that the work groups formulate opinions relevant to the business climate as a whole, not individual investors. Each year FICIL submits its recommendations to the Cabinet of Ministers and a recap of this year's High Council meeting can be found here. To sign up for FICIL working groups, you are invited to apply here.