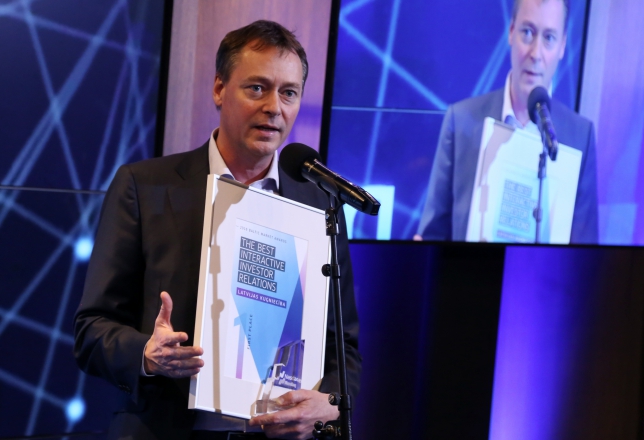 Nasdaq announced the winners of the Baltic Market Awards 2016 during the live video bridge ceremony co-hosted by Nasdaq Baltic stock exchanges in Tallinn, Riga, and Vilnius on January 26. For the first time also Baltic Bond issuers were recognized for excellence in investor relations.

In total 45 Share issuers and 9 Bond issuers were evaluated according to over 160 criteria in 2016. The Awards were handed out to winners in 7 categories.

Tallinna Vesi, the largest water utility company in Estonia, was announced the winner in the main category Best Investor Relations in Baltics 2016 for the fourth consecutive year.

Given the exceptional development of the Baltic Bond market, for the first time a list of companies subject to evaluation was expanded by including bond issuers. Latvenergo, the Latvian energy company became the first State Owned Enterprise (SOE) nominated for the award Best Investor Relations in Baltics among Bond Issuers 2016. To mark the occasion, Adena Friedman, CEO of Nasdaq, invited the winner Latvenergo to ring the Bell at Nasdaq MarketSite in New York.

Apranga, the Lithuanian clothing retailer, was named the best in the category Best Investor Relations According to Market Professionals 2016.

LHV Pank from Estonia was recognized as the most active and dedicated financial intermediary on the Baltic market winning the Member of the Year 2016 for the fifth time within the life of the Baltic Market Awards.

"Baltic Market Awards has a strong history of bringing together Nasdaq-listed companies and members to celebrate outstanding achievements in transparency, sound corporate governance and investor relations which are key to building confidence in the capital markets," said Arminta Saladžienė, Head of Nasdaq Baltic. "I would like to congratulate all the winners and nominees who have shown excellence in investor relations and serve as inspiring role models."