Dainis Butners, who interned at AmCham this summer, is AmCham individual member and President of the European Business Association of the McDonough School of Business at Georgetown University. Dainis has written three articles in a series "An American in Riga - the View from Washington".

The current state of affairs in the world has made people and investors understandably nervous and hesitant as they look to secure a return on their invested capital. The impacts of geopolitical events and volatility within the markets weigh heavily in the minds of business executives as they seek to mitigate risk and defend the bottom line to deliver returns for their clients and shareholders.

Which is why the visit of former U.S. Secretary of State John Kerry to Latvia this past March was a pleasant surprise for investors when he remarked that "Latvia is a great place for foreign investment." Over the course of his March two day visit to Riga, Mr. Kerry met with Prime Minister Māris Kučinskis, representatives of the American Chamber of Commerce in Latvia (AmCham), Citadele Bank, and the Investment & Development Agency of Latvia (LIAA). The topics of discussion between Mr. Kerry and his Latvian counterparts included global economic trends, economic cooperation, economic links in information technology, food exports and financial services, as well as geopolitical concerns. 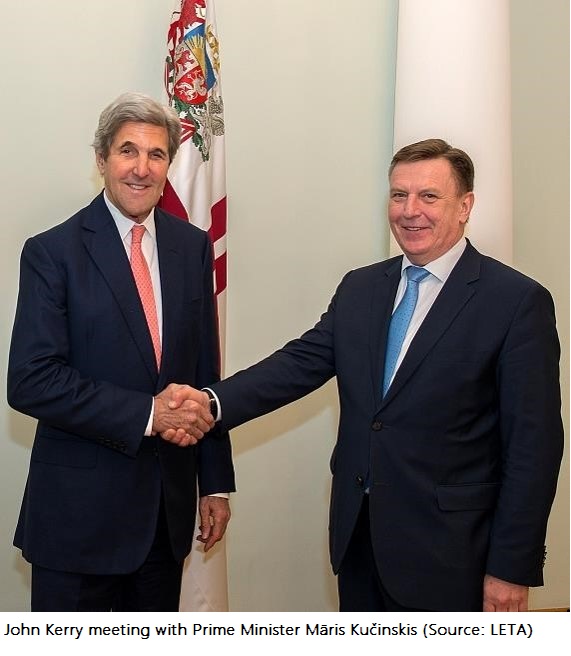 It is important to revisit Mr. Kerry's March visit to Riga as we all prepare for the summer as it serves as a benchmark in American commercial interest here in the Baltic region.

During his interview with LETA, Mr. Kerry agreed that U.S. investors' interest about the Baltic region is increasing and that "I am here to get an inside view on what the situation is today, what the needs are, and what the road ahead is." After reviewing the global business environment, a U.S. investor would take all options into account and then ask themselves when looking to Latvia: "Why should I invest in a country like Latvia?"

Yes, why should one invest in Latvia when compared to other options?

Latvia has made leaps and bounds since the Global Financial Crisis of 2008 and stands out now as a leader for economic growth in the Eurozone economy. Let us look at the factors that stand out. 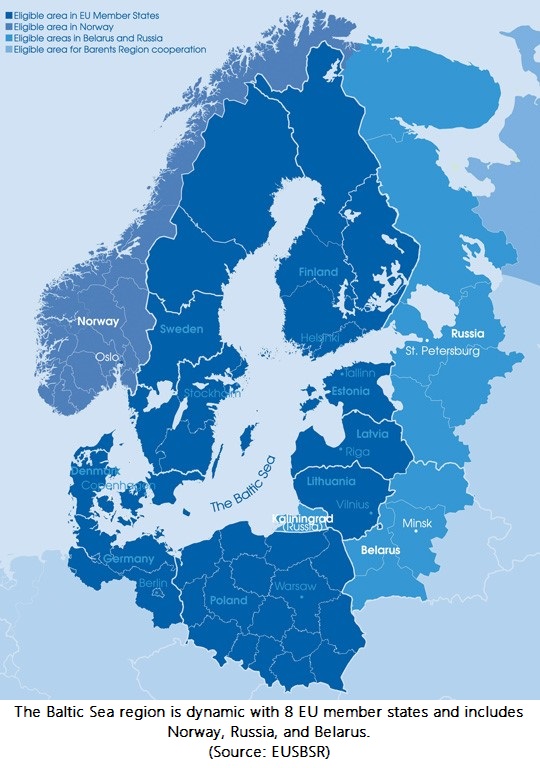 Latvia has a very favorable business environment, is competitive among the countries of the Baltic Sea region, has a very qualified talent pool, and a government that is looking forward to the future as it seeks to continue to attract investment.

Latvia joined the ranks of the top 20 out of 190 countries within the World Bank's Doing Business 2017 report where it currently ranks 14th. The country has made great strides to improve access to credit as well as improving online tax collection. When compared to the other countries of the region, Latvia stands out in particular, although to be fair the Baltic Sea region is a dynamic place where 7 economies in the region are ranked in the top 20 globally.

Over the last 9 years, Latvia has climbed from being ranked 30th in terms of ease of doing business to its current ranking of 14th in the world. This steady and progressive climb reflects government reforms that facilitate a business climate that rivals others within the Eurozone economy.

During his visit, Mr. Kerry remarked on the Hanseatic history of Riga during his visit and it reflects on the current dynamics as the city is a major metropolis and among the fastest growing cities by number of companies setting up business. Riga is the 3rd largest of the Northern European cities, behind Oslo and Stockholm, and its geographic position serves as an ideal gateway between the United States, the Baltic Sea region, and Eurasia.

In addition, the factors that drive foreign direct investment were highlighted during the 2-day visit: the business policy and reforms adopted by the Latvian government, the strength of the education system and the talented work force, and the benefits of Latvia's membership with the European Union. Furthermore, the growth of exports and industrial production as well as the country's 2.7 % GDP growth in 2015 were all touched on by the former Secretary of State. Put more succinctly, Mr. Kerry remarked, "[T]his looks like a place where something is happening, and I think that the possibilities are real."

Undergirding the country's climb in the Doing Business rankings are the government's implementation of substantive improvements in the local regulatory framework. These include better access to credit information by launching a private credit bureau, making paying taxes less complicated by improving its online systems for filing corporate income tax returns, and mandatory labor contributions.

One government reform makes Latvia a very interesting place to set up a business and to develop an enterprise. Passed by the Saiema in November 2016 and taken into effect in January of this year, the Law on Aid for Start-up Companies is to promote the formation of start-up companies in Latvia thereby stimulating research, as well as use of innovative ideas, products and processes in the economic activity. The law authorizes government financial support for start-ups and micro-enterprises. For instance, a qualified applicant for government funding can partake in financing 45% of their employees' salaries, as well as obtaining personal income tax and enterprise income tax relief up 100%. This is significant for a business owner as one strives to establish his or her enterprise as well as attracting and retaining highly talented labor.

The Latvian government continues to work on reforms that will further enable business owners and improve the overall climate. Organizations such as the AmCham and the Foreign Investors Council In Latvia (FICIL) continue to build a better business and investment climate through business advocacy, conducting policy forums and research, and fostering the trade & investment partnership between the United States and Latvia. While maintaining an independent and neutral position in its advocacy initiatives, AmCham has been a critical part of the dialogue between the business community and the government to bring in global business practices that will positively impact Latvia's business and investment climate.

While capital and financing for a business venture are critical components, the next consideration is the national labor force and locating the right talent needed to make a venture successful. What makes a country like Latvia competitive in the Eurozone economy is the underlying quality of the talent pool. According to LIAA, Latvia's workforce is ranked in the top five in the world in terms of university students per capita. In addition, one aspect of the labor force is the pride in having strong work ethics that are an integral part of Northern European culture.

The university landscape broadly covers the economy as Riga Technical University (RTU), University of Latvia, Riga Stradiņš University, and Latvia University of Agriculture enroll more than half of the students of Latvia. As of June 8th, University of Latvia and RTU are now globally ranked among 900 universities in the QS World University Rankings. In addition, the rate of participation is high for Latvian students across Eurozone programs such as Erasmus and AIESEC, which further highlights the broad exposure to the global economy.

Eurobarometer research identified Latvia as ranking second among European states for the percentage of residents, who in addition to their mother tongue can speak at least one more foreign language. 95% of Latvia's residents are fluent in some foreign language and 54% can speak at least two foreign languages. The range of languages reflect the country's position and history where in addition to Latvian, predominate languages include Russian, English, German, as well as a recent increase in Swedish and Norwegian. Overall, the educational foundation for the country provides it the platform in providing highly skilled labor for the national economy as well as meeting the new and emerging trends within the global marketplace.

The ascension of Latvia into the European Union in 2004 and the adoption of the Euro currency in 1 January 2014 marked a significant turning point for the economy and Latvian society as a whole. 25 years after the restoration of Independence, the country has emerged as a proud member of the EU with a seat at the table and integrated into the overall Eurozone economy. In joining the euro area Latvia further solidified its integration in the Trans-Atlantic community with fellow European countries and the United States. In addition to re-integrating with Europe, NATO membership was realized in 2004 with Latvia, alongside Estonia and Lithuania, becoming full members of the security alliance. The development of the country has been underwritten by its integration with the Eurozone as well as its commitment to NATO's collective defense of Europe. For countries that were not independent over 25 years ago, a seat at Europe's table is not just financially important as it is also a national-security issue.

Over the last 13 years, the country has undergone the exuberance of economic boom and the pain of crippling crisis. The Financial Crisis of 2008 was a critical test of the economy and threatened devaluation of the Lat currency as the price of an international bail-out in order to avoid default. The country regained competitiveness the hard way, by raising productivity, while the government balanced its books by raising taxes and cutting spending. While it is still argued in many circles whether the austerity solutions that worked in Latvia could work elsewhere, Latvia's recovery and position as a leading growth economy in 2017 is remarkable. Today, Latvia benefits from being connected to the ‎Eurozone economy valued at over .518 Trillion in GDP (2016). The single currency and single market further enables national economic gains through improved access and reduced costs for capital to increase investment, produce efficiently and export. In addition, the country's credit ratings have greatly improved based on the economic growth and prudent economic policies resulting from Eurozone membership.

John Kerry's March visit to Latvia provides a glimpse for U.S. investors who continue to learn more about this dynamic Eurozone economy. With the underlying strengths of a government continuing to improve the economic infrastructure, a highly talented labor force, and the benefits of the European Union membership, Mr. Kerry is on to something when he remarks "[T]his looks like a place where something is happening, and I think that the possibilities are real." Therefore, let us continue to explore the possibilities for U.S. investors and American companies to come and do business here in Latvia.

Dainis Butners is an individual member of the American Chamber of Commerce in Latvia and President of the European Business Association of the McDonough School of Business at Georgetown University.

This article is the first in a series ‘An American in Riga - the View from Washington'. Next the author will look at the challenges still facing the Latvian economy and further issues that foreign investors need to be aware of prior to investing as part of proper due diligence.