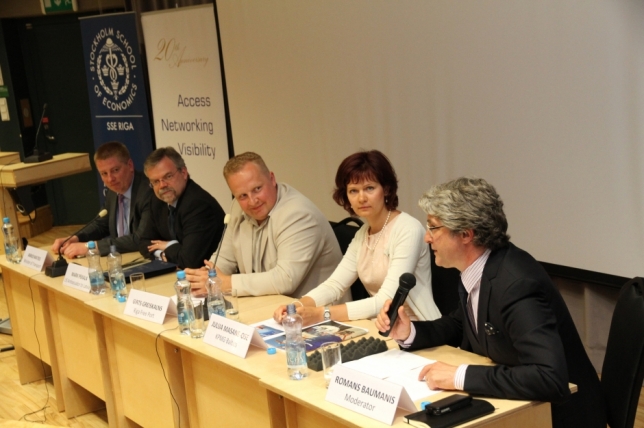 It takes all the running you can do to keep in the same place, but in order to stay ahead of the competition you should be running even faster. How well the transport and transit sector is doing to be competitive was debated in a recent Outlook.

On June 19, 2013 AmCham and its partners SSE Riga and KPMG Baltics held a seminar to discuss the development of Latvia’s transport sector. Invited experts explored how to maximize revenue potential for the state and how to boost regional and global competitiveness of the sector. In addition, they addressed both major benefits and obstacles for businesses.

The event was moderated by Romans Baumanis, Regional Advisor to Nord Stream in the Baltics.

Anrijs Matiss, Minister of Transport of Latvia gave a presentation on how the new Transportation Development Plan will increase the efficiency and competitiveness of the sector. He emphasized the significance of the Northern Distribution Network (NDN) that has contributed to the steady development of cargo transit flows. According to the Minister, Latvia is a major transit corridor connecting the Baltic Sea with Central Asia and much can be done to attract even more business to the existing transportation networks.

Mark Pekala, US Ambassador to Latvia shared his views on the US experience with the transit through the NDN, and what the US investors are looking for. He stressed that the transportation sector can be seen as a catalyst for the development of stronger and deeper economic partnership between the US and Latvia. So far 100 000 containers with 4 billion tons of goods have been transported through Latvia to Afghanistan. The Ambassador said that Latvia’s transport sector has enormous potential for the future where the NDN can serve as a well-established structure for the private sector. Key challenges remain harmonization of the web of regulatory issues, border procedures and tariffs. He announced that from now on Riga will serve as a transshipment center to the Central Asia. He also drew upon recent recommendations by FICIL to the Government of Latvia aiming at continuing making progress to attract more investment in the sector. Transparency, fair competition and efficient court system are key factors for American investors. According to Ambassador Pekala, Latvia remains a great place for business, but in order to achieve the New Silk Road, more work remains to be done, especially on ensuring greater transparency and accountability.

Julija Masane-Ose, Associate Director at KPMG Baltics spoke on the competiveness of Latvia’s ports in the Baltic region. Transit remains a very important strategic sector of Latvia, therefore KPMG concludes reports on its competitiveness for the 2nd consecutive year. Masane-Ose mentioned that Latvia competes with the other ports in the Baltics, however, the most significant competitors are the CIS. “It is not enough to compare how well we are doing in comparison with the other Baltic ports as we are fighting for cargo with the CIS ports. Actually, we are contracting instead of growing,” she said. Masane-Ose also stressed that rating port efficiency by shipment of cargo volumes is not enough. It is important to take into account types of cargo. According to businesses operating in the ports, the factors influencing competitiveness are the total cost of the entire supply chain, quality of service, politics and governance. The further development of Latvia’s ports would benefit from involving independent professionals in the governance of ports. She added that industry experts often point out the lack of transparency in the ports of Latvia and, in comparison, Port of Tallinn has set clear rules of the game, translating in a more transparent environment.

Girts Greiskalns, Board member of Riga Free Port offered his views on how to unlock the full potential of Latvia’s ports. He posed an open question if Latvia is amongst top runners or lags behind others. According to him, the only KPI Latvia’s ports currently measure is cargo turnover. Riga Free Port has set a clear goal to be the leading port in the region, however, specification on concrete targets is nowhere to be seen. Greiskalns offered his perspective on various measures, including efficiency of operations by terminals or by port authorities, use of land, revenue and profit, employment. Perhaps the most important task would be to agree on KPIs that would reflect more than gross level of handled cargo volumes. Given that objectives and functions, institutional framework and financial capability of port authorities are clearly set, ports may become a game-changer for the entire transit sector.

Presentations were followed by a lively discussion. In conclusion, the moderator said that notwithstanding the extreme complexity of issues under various jurisdictions, in order to stay ahead of the competition there are certain common points that should be ensured:

To achieve the above goals, cooperation among government, private sector and NGOs is necessary. "We just need to keep cooperating however difficult it may seem and however concerned we may be that our issues are not in focus of everybody’s attention. We have to be patient and keep building trust, which can only be done through cooperation," said Baumanis.