Isn’t €1Bn a year too high a cost for malfunctioning insolvency process? 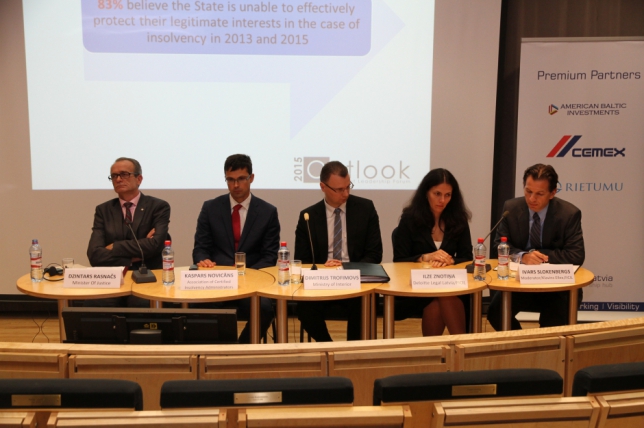 On October 15 at the Outlook seminar experts, decision makers and business representatives met to discuss the insolvency process and its impact on Latvia’s business and investment climate. A broad coalition of organizations – the American and Norwegian Chambers of Commerce in Latvia, the Foreign Investors Council in Latvia (FICIL) and the Latvian Chamber of Commerce and Industry – gathered to reinforce the necessity to continue reforming Latvia’s insolvency system in order to provide confidence and security of both foreign and local investments.

Inefficient insolvency process has a negative impact on the economy causing losses to the businesses, employees and the public sector. The conference was held as a follow-up from the previous Outlook held on November 28, 2013 when it was agreed that it is necessary to improve the application of the law of insolvency, to prevent abuse of insolvency proceedings and impose stricter management tools to the parties involved in supervision of the insolvency system.

Among one of the issues discussed was the average recovery rate of secured creditors in Latvia (42%), which is substantially below that in OECD high-income countries (72%). Recovery rate of unsecured creditors, including the State Revenue Service, in last 7 years was less than 2%, also behind international benchmarks

The panel of distinguished experts evaluated how the insolvency process in is overseen and what can be done to improve it. Joining the debate were the following experts:

•    Dzintars Rasnacs, Minister of Justice of Latvia;
•    Kaspars Novicāns, Deputy Chairman of the Association of Certified Insolvency Process Administrators of Latvia;
•    Dimitrijs Trofimovs, Under State Secretary of the Ministry of Interior;
•    Ilze Znotiņa, Head of Deloitte Legal Latvia and Chair of Insolvency Working Group of FICIL.

The event was moderated by Ivars Slokenbergs, Senior Associate of Klavins Ellex and Vice Chair of FICIL.

Kaspars Novicans, Vice Chair of the Association of Certified Insolvency Process Administrators presented how administrators are assessed and spoke on their proposals to improve the system. Among the main challenges encountered by the administrators are delayed applications for insolvency, hidden assets, non-efficient supervision, inadequate responsibility of board members and inconsistent court rulings.

Dimitrijs Trofimovs, Under Secretary of the Ministry of Interior outlined the main challenges in the investigation of economic crimes, among which the necessity to raise professionalism and competence of police officers and the lack of resources to reimburse them stood out as the most pressing.

Ilze Znotina, Head of Deloitte Legal and Chair of FICIL Insolvency Work Group highlighted the recommendations submitted to the government as outlined in the recent FICIL’s position paper . She said that the insolvency system should be based on the following values: predictability, equitable treatment, transparency, speed and maximized recovery. However, due to poor application of the law, there are many challenges: no system for monitoring and measuring the efficiency of insolvency, insolvency proceedings have caused large economic losses, recovery rates for creditors are behind international benchmarks, no system in place to identify and prevent insolvency abuse, significant amount of late insolvencies, which all lead to a serious risk of generating future economic losses if such system is not created. She said: “All of us are suffering from the abuse of the insolvency system, therefore fighting economic crimes has to be a high priority issue on the government’s agenda along with raising awareness of general public.”

During the event the results of the second indicative survey about the credibility of the insolvency system was presented. According to the survey, 83% of 187 respondents admitted they don’t trust the ability of the state institutions to effectively protect their legitimate interests in the case of insolvency, while 84% consider that insolvency proceedings are not fully transparent and fair. The business people also indicated low trust in all institutions involved in governance and supervision of the insolvency process. Most trusted from all involved were courts (4.6 points out of 10). The least trusted were the State Police and Prosecutor’s Office (3.1 out of 10). Insolvency administrators and the State Agency “Insolvency Administration” were both received 3.7 points out of 10.

An additional question in this year’s survey was posed to members of AmCham, NCCL and FICIL members about the goal of the Insolvency Law. 70% respondents addmitted that the Insolvency Law doesn’t meet its ultimate purpose to promote the fulfillment of the obligations of a debtor in financial difficulties and to renew its solvency when possible.

Respondents suggested several improvements of the insolvency system such as prosecution of corrupt administrators, introducing sharp control function, full replacement of all insolvency administrators, and reforming the whole Insolvency system. Many respondents admitted the legislation has been amended, but overall improvement has not been achieved. Enforcement and application of law remains among the main challenges. The results of the questionnaire are available here.

AmCham Outlook addresses business topics of interest to AmCham members and the wider business community in a timely and lively forum. The event program involves detailed remarks from each speaker, followed by a Q&A session.

The video from the event is available below: 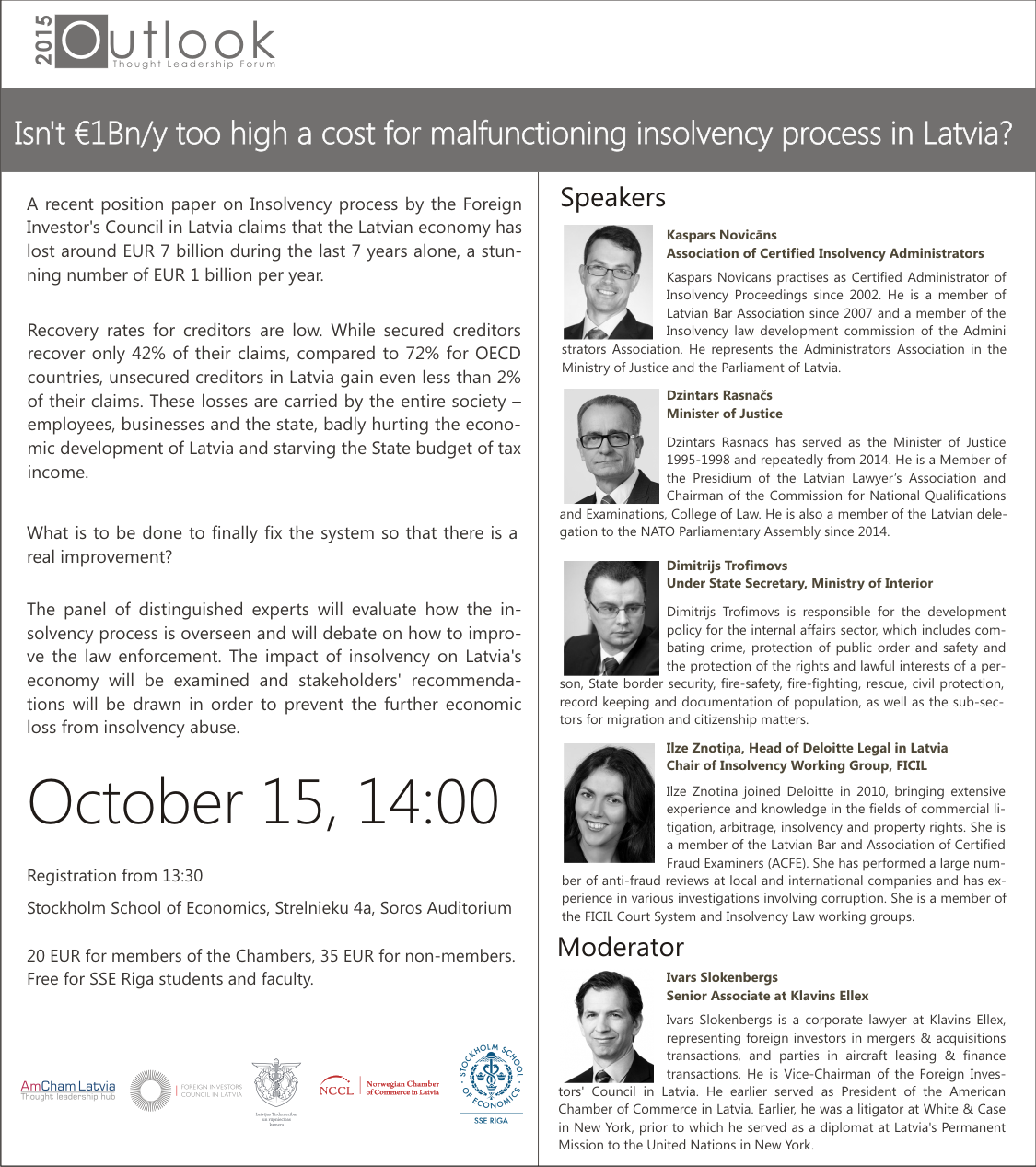