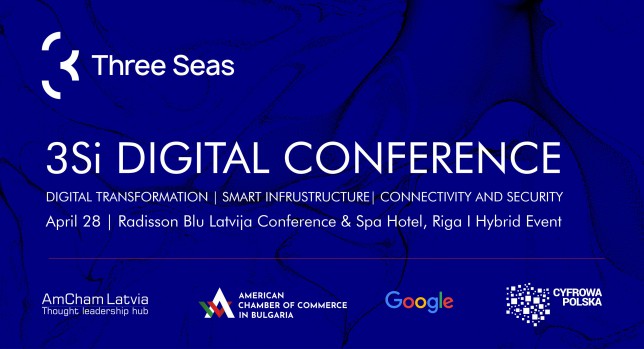 On April 28, AmChams in Latvia and Bulgaria in partnership with Digital Poland and Google hosted a Three Seas Initiative (3SI) Digital Conference in advance of the upcoming 3SI Summit in Riga. Experts outlined several important issues such as the significance and urgency of the digital transformation, the necessity to establish a coordinating institution of the 3SI as well as the opportunity to build strategic partnerships to integrate the Central and Eastern European region in the global market.

In his opening statement, John Tully, President of AmCham Latvia, Chairman of the Board at MikroTik said that “since Russia’s barbaric invasion of Ukraine, promoting regional collaboration has become more relevant than ever. It is critically important to cooperate in the digital area, boosting cross-border connectivity and securing smart energy, transport and digital networks. Now is the time for our countries to become closer integrated with one another and within the transatlantic community.”

Keynote speakers of the event were as follows;

The panel discussion and the second part of the conference was devoted to digital transformation in the 3Si region and addressing new challenges with the following speakers:

The discussion panel concluded that the digital pillar of the 3SI countries is strong. “The cooperation between the 3S digital ministers has never been better. Our impact on EU digital policies has rarely been greater and, given the crisis and the war in Ukraine, the need for the 3SI has never been more urgent,” said Mark Boris Andrijanic, Minister of Digital Transformation of Slovenia.